Former British Prime Minister Tony Blair was the keynote speaker at the Judson University 2013 World Leaders Forum. During the program, Mr. Blair answered questions submitted by audience members and shared personal recollections from his long career. He talked passionately about religious freedom, tolerance and embracing diversity as a way of uniting people. Judson University trustee and alum Dr. Nate Adams opened the session with levity mentioning the great lengths the university had taken to plan the wet, cold, damp weather to ensure Mr. Blair felt right at home. Tony Blair lead the British Socialist Labour Party from 1994 – 2007. In 1997, at the age of 42, he was elected Prime Minister of the United Kingdom and served three consecutive terms in this role until 2007.

Judson Theology Professor Dr. Darrell Cosden shared stories of the challenges and rewards his family experienced on extended missionary trips to both Scotland and Russia. Cosden first became aware of Mr. Blair when Cosden arrived in Scotland with his wife and one year old son. He earned his Doctorate at the University of St. Andrews in Scotland. He said, “We shape the community and they shape us. Communities have roles to fill. Society exists for the sake of those in it.” Newly elected Judson University President Dr. Gene C. Crume joked that introducing Mr. Blair was quite a cap to his first week in office.

Mr. Blair took the stage with a few introductory remarks on the differences between US and British elections. He noted the British campaign season lasts just four weeks. Voting occurs on Thursday and the next day the winner steps into their new role. It is traditional for staff members to line the hallways and shake hands with the outgoing Prime Minister as they exit the building. It is not unusual to see tears flowing during this emotional moment. The newly elected Prime Minister then walks in the front door, again shaking hands with the staff. Mr Blair admitted this was a stressful situation.

Mr. Blair and Dr. Adams relaxed on chairs placed center stage and answered questions submitted by the audience. When asked about the recent death of Margaret Thatcher, Mr. Blair recognized her strong support of the American and UK alliance. He remarked the fall of communism has been the biggest change since Thatcher’s time in office. “It is interesting to reflect on what a bygone challenge that is now. The hardest things for us now are that the challenges are not asymmetrical and not what we usually expect. There is extremism based on religion. It is still important to remain united and for the US and UK, as free nations, to stand and stick together.”

On the situation in North Korea, Mr. Blair warned, “This is going to have the be managed to a place of stability. We need China and American to stick together. It seems so crazy and seems so out of normal. These are the hardest things to deal with and a tough choice either way. These rogue states require us to be strong and staunch.” Mr. Blair mentioned leading the UK’s military action against Sierra Leone and other countries. He stands by his beliefs that it is the responsibility of governments to stand up to extremists. “It is uncertain what will happen if they stay in power and what would happen when they are no longer in power. With a nod to the United States he said, “There are few counties who are able and capable to lead the free world.”

Mr. Blair clearly had no patience for the United Nations intervention. He said, “My old agenda was entirely domestic before Serra Leone. A group of gangsters toppled the democratic government. If we were to wait for the UN we would be waiting for a very long time. I decided to send in British troops. I am currently working with my charity to help Sierra Leoneget on their feet.” He returned to the conflict in Sierra Leone a number of times during the discussion. 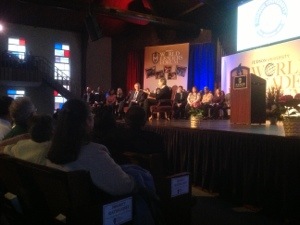 During the evening, Blair talked about the tough choices he had to make including involvement in foreign government and toppling extremist leaders. He noted the hardest part was not getting rid of the dictator but what comes afterward. He believes the world is a better place with Sadam Hussein out of power citing the half million Kurdish people who died during his reign. He showed distain for politicians who pander to their party. The audience gave a round of applause when Mr. Blair declared, “I believe it is an elected official’s responsibility to their country to do what you believe is right.”

Dr. Adams asked Mr. Blair to describe working with Presidents Clinton and Bush during his three terms as Prime Minister. He called Clinton his “political soul mate” and Bush a close political ally who’s countries were pushed together due to war. While there was a serious tone to the evening, the Q&A lead to several humorous stories.

Blair told of a diplomacy lesson Clinton taught him. “When we go to these big international summits, often held in far off islands, the locals like us to wear an item of local clothing. At one of these summits, I returned to my room to find four shirts laid out on the bed. The first was hideous and the rest got progressively worse. I chose the first one and wore it to the event. Bill Clinton however was wearing the worst of the four. I said to Bill, “Why are you wearing that horrible shirt?” Bill said, “When the American people see me they will say, ‘How nice of him to wear a local item.’ When they see you they will just think you have bad taste.”

There were stories of President George W. Bush, keynote speaker at the Judson 2011 World Leaders Forum. At a Camp David press conference, President Bush was asked “Do you share anything with Mr. Blair?” Bush quipped, “Yes, we share the same tooth paste.” President Bush and Mr. Blair worked closely together on foreign affairs, particularly the Afghanistan invasion. “I have a rapport with President Bush. The public is more agreeable while parties are more political. When this happens, things get less civil. Constituencies are one stripe or another. I watch for leaders who stand up to their party base and believe if elected they are there to represent all the people, not just their party.”

When asked what advice he might offer to President Obama, Mr. Blair was candid on the challenges of leadership. “The greatest problem is there is no training for this job. After a year in government, I would tell people I’m still learning. Once you win reelection, you know what’s going on. Your time is limited and there are certain key things you can and cannot do. You can’t do 100 things but maybe can do four. Now you have confidence, your time is short, and you are thinking “What can I get done to shape my country?”

He remarked about the growing chasm between the wealthy few and the masses. Mr. Blair voiced his explicit opinion noting the changes in the world in since his youth. “In my view, the key is education. For countries and society, we need to adapt throughout our life. (In my neighborhood) when I was growing up everyone was white, Christian and you had one job all your life. Now we have many jobs during our careers. There is a need for education, to adapt and adjust all through your life. In my country, despite reforms, we need to drive down to the root of our society. We have to give our children a good education.” 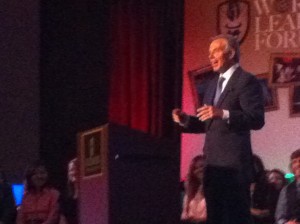 Of course there was a question about Blair’s relationship with Queen Elizabeth II. When asked about his rumored anti-monarchy stance and if the movie “The Queen” won him over, Mr. Blair shed insight into their partnership. He said, “The movie came out when I was Prime Minister on the day of my weekly audience with the Queen. It is held in a lovely room in Buckingham Palace. The Queen starts out the meeting by saying, ‘I hear there is a film about me and you. I want you to know I shan’t be watching it. Will you?’ I replied ‘No.’ As a loyal royal subject, I haven’t.”

Faith did not play a key role during Mr. Blair’s youth. It was not until his college years in Edinburgh that religion became an integral part of his daily life. Since then, his faith has been a strong element in his world. During the evening he mentioned his faith and travels to the Holy Lands which he called “a fascinating, wonderful place.” Highlighting Isreal, West Bank, Galilee and the Jerusalem Jesus Trail, Mr. Blair talked of relaunching the peace process and developing tourism in the area. He declared there are no security problems in Gaza. On the banks of the River Jordan there are baptismal sites and churches. While the “politics may be terrible, the weather is beautiful and people are great.”

Asked to acknowledge highlights of his three consecutive terms as Prime Minister, he referenced his two proudest moments. The first was the 1998 Good Friday peace agreement between Northern Ireland and the Republic of Ireland signed in Belfast. He mentioned this several achievement times during the night. The second accomplishment was winning the 2012 Olympic bid. He declared, “My most insincere answer at a press conference was when I was asked, ‘Does the fact you beat out theFrench make the victory (Olympic bid) any sweeter?” I answered, ‘Absolutely not.'”

Since leaving Downing Street, Mr. Blair has been active in worldwide efforts to bring people of all cultures and religions together. He worked with the Palestinians to establish statehood and peace in the region. 2008 saw the launch of the Tony Blair Faith Foundation to “show love of Christ. We built the foundation to show people of various religions better relations between them and promote the idea of faith as a force for good. The media reports when faith causes problems. I see examples where it benefits us. It is not complicated. What is really important is to go out and show the world what faith can really do. Important to do it and with pride. The goal of the foundation is to counter extremists in all religions and to use faith as a way to unify people rather than divide through distortion to fan the flames of hatred and extremism. The Tony Blair Faith Foundation is a response to these opportunities and challenges. We educate, inform and develop understanding among the world’s major religious traditions.”

Established in 1913, Judson University isan evangelical Christian college located in Elgin, Illinois next to the Fox River and near Interstate 90. With over 1,200 students and 60 majors from Management and Leadership to Architecture. This is the university’s Golden Centennial Anniversary, commemorating 50 years since the college’s relocation to Elgin in 1963.

Judson’s World Leaders Forum began in 2011 to “ignite a flame of leadership” for attendees. The program is also a fund raiser for the Judson Student Scholarship Fund. Mikhail S. Gorbachev, 1990 Nobel Peace Prize Recipient and Former President of the Soviet Union was the 2012 keynote speaker. In addition to the community event open to the general public, a VIP private reception and networking event was held. For information contact Jessica Bunn, World Leaders Forum Coordinator.