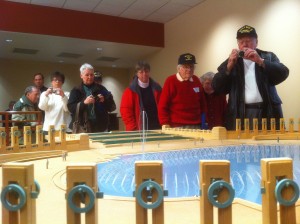 Woodstock, IL – Motorcyclists braved Sunday May 15’s windy, cool weather to ride in the 24th Annual Little Angels Pledge Run. Sponsored by the Elgin Area Organization of Harley Owners (EAO) in partnership with Woodstock Harley-Davidson proceeds from the 80-mile ride benefit Little Angels, a home for children and young adults with severe disabilities and complex medical needs. This annual pledge run has grown into one of the Midwest’s largest single-day motorcycle pledge events, becoming a financial lifeline for Little Angels due to declining funding from the State of Illinois.

“It doesn’t matter what the weather is like,” noted Woodstock Harley-Davidson’s Kricket Jackson, Marketing/Events Coordinator. “Harley riders have the biggest hearts and know how to have fun. And more importantly know where to come for the fun.”

Fun and great shopping: store customers received a special 15% discount on all motorclothes purchases. I was stationed inside the store demonstrating Woodstock-made Capsurz, the only patented cap saver accessory cord that keeps your hat on your head. “Made in USA? What a great idea! I don’t need to lose any more hats to the wind,” I was repeatedly told.
Beth Norman, EAO’s Pledge Run Coordinator, began the distribution of honors and prizes by presenting a plaque to the McHenry County H.O.G. Chapter. James Prout, accompanied by his daughter, Alannah, accepted the award.

“We had the most riders that signed up and showed up,” Mr. Prout proudly acknowledged.

Gathered outside in anticipation of the 2011 Raffle winners the crowd applauded the Top 3 Pledge Winners revealed by Ms. Norman.

“Thank you for coming out on such a day,” Ms. Norman told the appropriately leather-clad group after announcing the lucky raffle winners.

Save the date: the 25th Annual Little Angels Pledge Run will be held the third Sunday in May, May 20, 2012.