Jim Green commonly known as The Wandering Endorphin delighted crowds recently at the Algonquin Library. His distinct style of playing includes strumming, plucking, picking and percussion which he calls percussive guitar. Jim hammers the guitar strings like piano wires and Jim uses the entire guitar neck and all sides of the body. Visit Jim’s website  to view free lessons and learn how to play his style.

I when I asked Jim what he loved about playing music, he said Michael Hedges summed it up best with “Because I can dream out loud.”

Growing up in Sauk Village, Jim quit his day job and moved to Chicago to launch his music career. Beginning with open mike nights he later became a Chicago street musician. He can also be found writing digital piano reviews in his free time. His travels led Jim to Israel for 10 months where he lived, played and wrote music in Tele Aviv. Jim is heading back to Israel for four more months.

At Jim’s performances delighted the audience, both children and adults, with his engaging style. This show included singing, guitar, harmonica and a Native American Love flute. Jim still plays his first guitar, an Aspen, at his gigs and a Martin guitar for studio recording. 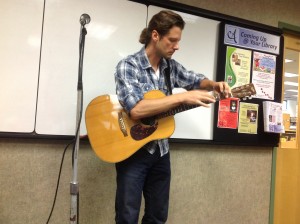