The Honolulu Academy of Arts in Honolulu is a cultural smorgasbord. The museum is home to a permanent collection of art from around the world and much more. The Doris Duke Theater screens independent and international films. The open air Pavilion Cafe serves a fusion lunch menu featuring local ingredients amid a tranquil garden. Your tour of Shangra La, Doris Duke’s home with a collection of Islamic art, begins and ends at the museum.

One of my favorite areas is the peaceful Chinese Courtyard with the brilliant lotus blossoms poking out from the azure pond, guarded by stone dragons. 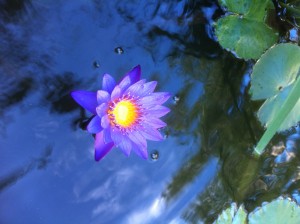 Lotus blossom in the Chinese Courtyard Honolulu Academy of Arts

Ji Sun Chang suggested we visit the museum for a special exhibit. On display November 03, 2011 – January 08, 2012 are 56 paintings from the Palace Museum also known as the Forbidden City along with items from the Honolulu Academy of Arts collection. This is the first time these 13-14 century works of art have traveled outside China. Collections Registrar Pauline Sugino traveled to Beijing to bring this collection to Hawaii.

These pieces feature several distinct styles of brush strokes and use of color. The works of these four masters influenced artists of the Yuan dynasty. I was amazed at how well these paintings have been maintained. Despite their age, they are in excellent condition. 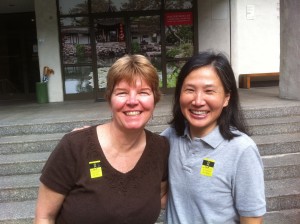 QR codes posted next to the landscapes link to podcasts with more information about specific works and artists. Click on the image below to see the introductory episode.