Watching graceful hula dancers is one of my favorite activities during visits to Honolulu on the island of Oahu, Hawaii. Many nights during the week you can watch a hula show for free at Kuhio Beach Hula Mound on Waikiki Beach. Located just east of the famous Duke Kahanamoku statue, you won’t miss the crowds filling in just before show time. The Hawaiian hula is a living record of the island’s history and legends of the Hawaiian people. The dancers’ movements, music and chanting combine to tell the stories of their forefathers.

The show starts after the tiki torch lighting which adds to the festive atmosphere. The outdoor shows feature local hula dancers ranging from novice keiki (children) to aunties (adults). I like to go to the show multiple nights to watch different halau (dance groups) perform. Each group has its own repertoire of songs, costumes and instruments. 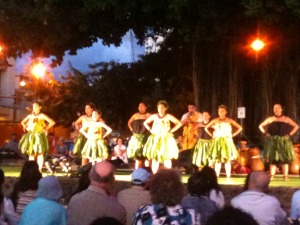 If you are anywhere along the beach, you will know the show is about to begin when you hear the traditional blowing of the conch shell. Sometimes a torch lighter joins them as they make their way along the beach. This alerts vacationers to get their spot so as not to miss the start of the show. Bring a beach chair or pick up an inexpensive beach mat from any of the local quick marts and grab a spot near the mound.

Usually a narrator will introduce the history of Hawaiian culture and language to the group. Before the dancers begin, you will learn about each song’s message and the story it tells.

These dancers may wear traditional hula attire or more modern dress. To make the time-honored hula skirts, the dancers harvest and treat the long flat leaves of the green ti plant. Colorful tropical flowers are fashioned into beautiful, fragrant leis. A variety of nuts grown in the islands are strung together as necklaces.

Dancers share the mound with vocalists who chant and sing the traditional stories. Musicians join in with their mix of modern and traditional instruments to make each tale come alive. The large drums made of gourds or tree trunks have a full sound which carries along the beach.

Weather-permitting, you can catch these hula shows Tues., Thurs. and Sat. at 6:30-7:30 p.m. (6:00-7:00 Nov.-Jan). These hula shows are one of my favorite stops on trips to Waikiki. Check out these shows often to learn more about the people and culture of the Hawaiian island. Aloha…

We recently met a group of surfers in Honolulu, Hawaii just outside of Waikiki. Walking along Diamond Head Road and the Pacific Ocean, we headed from Waikiki Beach toward Fort Ruger and Kapiolani Community College. This group looked like they were having so much fun, we stopped to talk with them. After a morning of surfing, they met for a potluck at the beachfront park. They had quite a spread including homemade pumpkin bread. This group surfs together in this spot and gathers for informal parties regularly. Any excuse for a potluck is welcome. Recently celebrated were Christmas, Thanksgiving and their patriarch Gilbert’s birthday.

We watched this garden over the past six years and it is a highlight of our early morning walks. It is a favorite place to stop, admire the view, talk to the gardening crew and others gathered at this local hangout.

This is their fourth annual tree trimming party. There are not many evergreens growing along the tropical Pacific coastline and the local preference against tree removal has forced the community to improvise using a cactus tree.

Jan said, “We end up feeding everyone who comes along.”

The group set the food selections on the low wall. Next, they assembled several boxes housing an eclectic collection of ornaments amassed through the past four years. One of the bravest souls, Doug, teetered on the tall step ladder as they decorated the 20 foot cactus tree and shared memories sparked by the decorations.  Kevin Simon is holding the ladder steady.

When I asked where all the ornaments come from, Jan said, “They come and go. That’s how it is.”

As we looked at a cartoon character ornament, another tree trimmer Loke Simon said, “Some have stories. Some just appear. Some just disappear.”

Thanks to Jan, here are some of the cast of the video and behind the scenes details.

Gilbert is the patriarch of the garden, the older Asian man. Without him, the garden would be non-existent, as he has nurtured it from dirt for the past 10+ years with plantings from his own residence. We are just his “helpers.” Soyu Kawamoto is the man who said his favorite ornament was the burlap “rat.”  He is an awesome surfer! Steve Casar was the elf that put up the “McCafe'” ornament. Other people that I could see in the background are Meiko, Fe, Ihan and her daughter Jade, and Aussie Pete (we have approximately 6 “Petes:” Aussie Pete, Painter Pete, Dr. Pete, El Camino Pete and a just-plain Peter). There’s also Buddha Pete, a religion professor at the University of Hawaii.  A somewhat somber person when I first met him, I now call him “Sunshine” when greeting him out in the water…he likes that, it makes him smile.

If you are near Diamond Head Road and you spot one of these beachfront potlucks, pull over, park your car and share your malasadas and a few laughs with the crew.

Mele Kalikimaka from the crew of Where Are You Today?

While many of us just recently learned of the Great Pacific Garbage Patch floating 1000 miles off the California coast in the North Pacific Gyre, scientists tell us it has been growing steadily since the 1950’s. Birds and animals get entangled in the trash and ingest tempting looking pieces of plastic causing a high concentration of chemicals in our food chain.

Weight is estimated at over 100 million tons spanning an area twice the size of the state of Texas. The Great Pacific Garbage Patch even has its own Wikipedia entry. Experts believe 80% of the plastic comes from land based sources while 20% comes from ships.

I delighted in taking my kids snorkeling in Hanauma Bay in Hawaii this month. They were wide-eyed as they watched the colorful tropical fish swim arms length away. At all the beaches we visited in Hawaii we found plastic bags and other trash on the shore and in the water. It’s not just Hawaii beaches. We find garbage everywhere we go. While out hiking or geocaching, we take a bag to collect garbage. In fact, the other week I had to buy a tactical backpack to carry our hiking snacks/water in one compartment while filling up the others with beach trash. Cache in – Trash out. Plastic is 100% non biodegradable. It never breaks down.

What do you do about this growing problem? Start locally.
* Bring reusable bags with you when you go shopping. It’s an easy step.
* Pick up trash you find on your walks
* Reduce your waste. Can you fix it? Repurpose? Do without?

Only humans are to blame for this disaster and we are the only ones who can resolve the situation.