On a warm December morning, we met Carole and Jim Hickerson at Hickam Air Force Base in Honolulu, Hawaii. We were invited to attend an Arrival Ceremony for the recovered remains of six World War II and Vietnam War military personnel. Their transfer cases would then delivered to the forensics lab for identification, family notification and burial. Carole and Jim retired to the island of Oahu and attend a half dozen of these solemn ceremonies each year. 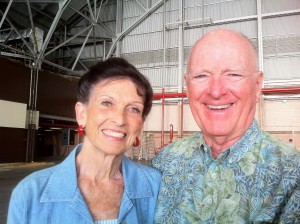 It is important to this pair to pay their respects to those who gave all for their country and they attend as many Arrival Ceremonies as their schedule permits. The remains of Carole Hickerson’s husband, a Marine pilot, came through Hickam in this manner in 2002. His body was escorted home, in full dress uniform and buried at Arlington National Cemetery.

During the years her husband was missing in action, Carole was frustrated by the lack of transparency from the U.S. government. There was no communication on the progress in finding and returning those service personnel who were unaccounted for during the war. While her husband was missing, she designed the image which later became the well known graphic on the black POW/MIA flag. She is quick to note she is not responsible for creating the flag itself.

Around 1970, my Godmother, Joyce Mary Moses, gave me a silver POW/MIA bracket inscribed with a soldier’s name and the date he went missing in action.

Carole Hickerson was instrumental in developing the POW/MIA bracelet program to build awareness and public support for the return of our soldiers. I wore this bracelet for many years until the metal fatigued. In March of this year, I visited the Vietnam Veterans’ Memorial Wall in Washington D.C and found the name Lt. Roger B. Innes etched on one of the panels. 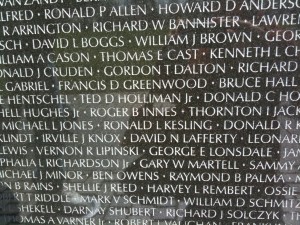 The name, Roger B. Innes, a solder killed in action during the Vietnam War, on Vietnam Memorial Wall Washington DC

Carole and her current husband Jim met through National League of Families of America’s Prisoners of War and Missing in Action in Southeast Asia.

Now retired from the Navy, Jim is active with the privately funded Pacific Aviation Museum on Pearl Harbor’s Ford Island. He enjoys military history and all the back stories that make the past come to life. Jim shared this story with us:

“A girl was buried on the U.S.S. Utah which sank on December 7, 1941 during the Japanese attack on Pearl Harbor. One of the twin daughters of the ship’s captain had died and the captain brought her remains aboard prior to the attack. The ship was prepared to sail the next day and the grieving father planned to bury his daughter at sea. The ship never sailed out of port. It was one of the many ships bombed and sunk just after dawn that day. The captain and his daughter’s body were forever entombed in the wreckage. Jim says this back story came out when the surviving twin visited Ford Island later in her life.”

Carole and Jim are celebrating 37 years of marriage. Congratulations to you both! 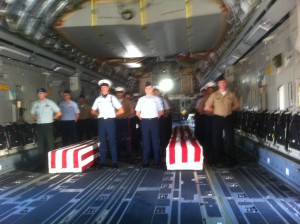 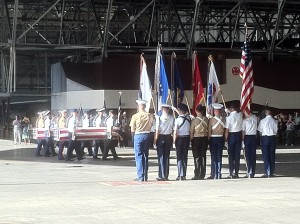 I met Ernest “Dave” Davenport, retired with 21 years in the Navy, on a flight to Honolulu, Hawaii. Dave is a survivor of the World War 2 attack on Pearl Harbor December 7, 1941. Although it has been 69 years since that fateful morning, the memory of the Pearl Harbor bombing is still sharp. The first attack surprised everyone. Dave and his fellow seamen quickly ran behind a barrier and started shooting. Dave said they were able to take out one of the planes.

After his Navy career, Dave returned to Virginia Beach where he taught high school for 17 years. Dave and his wife of 66 years have three sons and two daughters-in-law accompanying them to the reunion to meet with other members of the Pearl Harbor Survivors Association. They will be at the opening of the new Pearl Harbor Visitors Center this week.

The new Pearl Harbor Visitor Center in Honolulu, Hawaii at Ford Island is one of several collocated historically significant military sites. The brilliant white Pearl Harbor Memorial rests peacefully in Pearl Harbor above the battle ship U.S.S. Arizona lies at the bottom of Pearl Harbor with many of her crew still entombed. This is where world War ll began for the United States. Standing guard across her stern is the U.S.S. Missouri where the Japanese signed the peace treaty on the deck of the ship. The U.S.S. Oklahoma, Bowfin submarine and Pacific Aviation Museum are also located here.

This is the last Hawaiian reunion planned for the Pearl Harbor Survivors Association. Previously, the group met every 5 years at Pearl Harbor. Many survivors are unable to travel due to illness or advanced age. The number of survivors dwindles every year. Born in 1921, Dave was 20 years old on the morning of the Pearl Harbor attack. He is a spry 89 years old today with a twinkle in his eye. Many of the others on duty that morning were older.

The Pearl Harbor Survivor Association is chartered by Congress. When the members are gone, the organization will cease to exist. For Dave and other survivors, it is import for us to learn the lessons from the past and do our part to keep our future secure.

In closing, I asked Dave about his nickname. He said, “In the service, everyone is in a hurry and always rushing. If you had a long name, it got shortened. My name is Ernest but no one was going to use such a long name. So they shortened my last name Davenport to “Dave” and I have been Dave to everyone ever since.”

Aloha Dave. Welcome back to Hawaii.