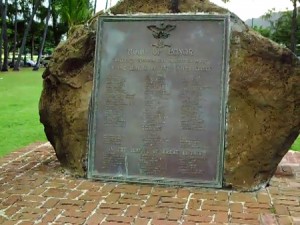 The Waikiki Natatorium, just Diamond Head side of Waikiki Beach is a memorial to World War 1 veterans. At the time, Hawaii was a United States possession, not yet our 50th state. Over 100 residents of Hawaii fought for our country in this war.

Opened in 1927, this salt water pool was a popular swimming hole. On opening day, celebrities were invited to the festivities and those attending included Olympic Gold Medalist and surfer Duke Kahanamoku. Other famous swimmers include Johnny Weismuller, Esther Williams and Buster Crabbe.

Bleachers next to the pool offered a specular view of the Pacific Ocean and Waikiki Beach. The concrete facade is divided by a towering iron gate fence while four stone eagles watch over visitors as they enter the pool.

The gate of the Waikiki Natatorium in Honolulu, Hawaii

Over the years, time has taken a toll on the building. The city of Honolulu infused money into renovations though these we halted before completion. The site is was closed due to dangerous conditions. The pool decks have deteriorated leaving gaping holes in the concrete.

Estimates to repair and reopen the war memorial are in the millions of dollars. Honolulu officials considered tearing down the facility and moving the gates to another location in Honolulu.

If you are in Honolulu, take a few minutes to visit the Waikiki war memorial while it still stands. When you visit, walk directly across Kaulakaua to see the World War 1 Veterans honor roll.

Click on the image below to watch this video episode of “Where Are You Today?”.