The Honolulu Marathon offers 26.2 miles of beautiful scenery for participants. The event held annually in mid December attracted over 22,000 entrants this year, about half of which came from Japan.

The event begins at Magic Island where runners, walkers and wheelchair athletes gather at the starting line. At 5:00, fireworks burst through the dark sky as the marathon begins. The masses move as one for the first mile or so then begins to spread out.

Downtown, Honolulu City Lights festival is in full swing. Honolulu Hale is decked out with lawn displays, twinkling lights and towering Shaka Santa and Mrs. Claus wave as we go by. Iolani Palace is festive with red and green lanterns throughout the grounds.

As dawn breaks, we are on Kalakaua Street along the Pacific Ocean in Waikiki. We pass the statue of Duke Kahanamoku and the Healing Stones in front of the Waikiki Police Station. The first elevation begins along the side of Diamond Head volcano. Once at the top, we are on the way to a long loop through Hawaii Kai. The last leg takes participants back up a hill, through Diamond Head neighborhood ending at Kapiolani Park at the edge of Waikiki. 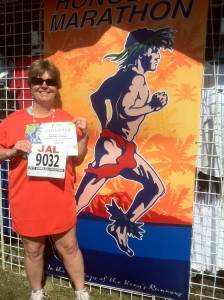 This event is organized by President Rick Davis and Public Relations Officer Ray Pagan of the Street Bikers United Oahu chapter. About 4,000 riders from all over Hawaii, mainland and Japan participate.

Tourist in Waikiki stop to watch the bikes as the roll by many with large toys on the front or back. Riders often dress in holiday garb.

Click on the image below to see video of the 2011 Toys for Tots ride in Honolulu.

“These bikes are coming from all over Oahu but we get some from Maui. We have some from Kauai. We have some from the Big Island,” said Street Bikers United Oahu President Rick Davis. “They ship their bikes over in a container usually a week ahead of time. They come just to do that once a year.” Ray Pagan, Street Bikers United Hawaii State Treasure, said bikers come in from Japan and the mainland also. Ray and Rick Davis organize this annual event. Pre-event work includes gathering donations from businesses to offset expenses which are over $12,000 each year. Bikers are asked to donate $2 each to ride in the parade. Money raised pays for police, permits, insurance and other expenses. There is much work involved and they organize the day because of the kids who benefit from the toys. Marines stationed at Kapiolani Community College collect over 10,000 toys at the end of the parade route, it’s no surprise that the most common toys given are the fastest RC trucks and cars. Yesterday, Christmas morning was brighter for 10,000 island children because of the generosity of SBU, riders and sponsors. We checked out the bikes and talked to the riders at Magic Island before the parade start. Emcee Michelle Shockley from KPOI 105.9 FM and music from Flux Capacitor entertained the crowds. Club members mingled and checked out the motorcycles decorated with holiday ornaments and loaded with toys. The Kaneohe Windward Harley Owners Group was well represented. Hawaii depends on tourism and this event contributes. Every year we watch tourists lining the parade route and cheering on the bikers. Off island riders stay at Hawaiian hotels, eat in restaurants and patronize bars. Some Waikiki residents are calling for an end to the parade due to noisy bikes.

“I would like to apologize, especially to the people in Waikiki that live there. We are going to try to hold the noise down, if possible.” Rick Davis continued, “If you can kokua us a little bit, we are only about an hour and half through Waikiki and it is a good cause for the kids. If you can try to have a little tolerance, we are trying to get the group to hold the noise down when we go though there. Thank you very much.”

SBU reached out to each club in advance asking for their cooperation. Before the parade start, Rick reminded riders to be respectful of Waikiki residents and not rev their engine on Kalakaua Avenue. Riders came out decked in holiday colors and we even saw a few Santa and Mrs. Clauses in the parade. Bikes of all shapes, sizes and styles were represented from Rick Davis’ orange trike to a pink Vespa Barbie and everything in between. See video from the 2009 Honolulu Toys for Tots motorcycle parade. Click on the image below to see the “Where Are  You Today?” video of the 36th annual 2010 Honolulu Tots for Tots parade along Waikiki Beach in Honolulu, Hawaii.